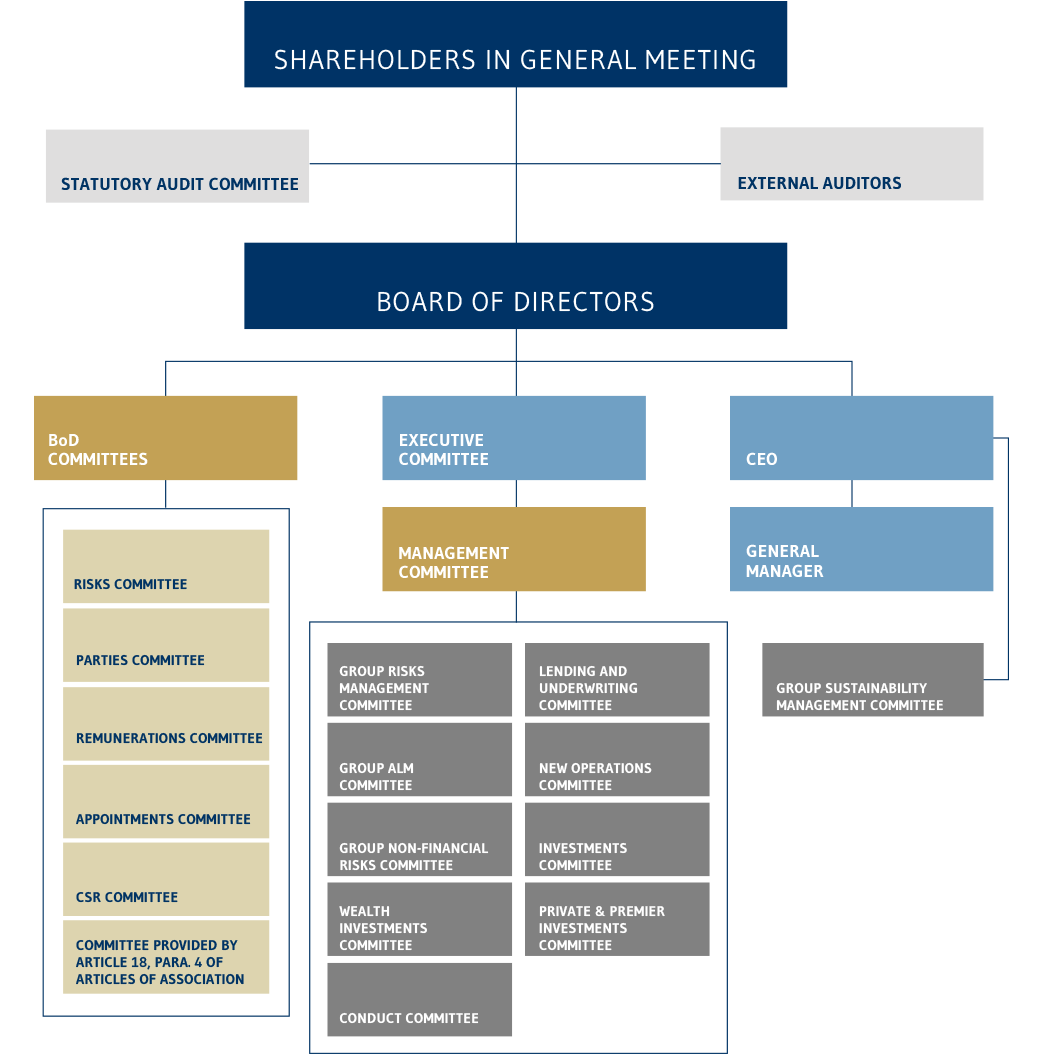 We have adopted a traditional governance model that clearly establishes the roles and responsibilities of the governing bodies to protect shareholder interests while ensuring management benefits from the best operating conditions.

In accordance with the recommendations in the Code of Conduct and the requirements of the Bank of Italy, we have set up four board committees: Risks, Remuneration, Appointments and Corporate Social Responsibility (CSR).

Fifteen years ago, our group started a transformation process, and has progressively evolved from a holding company to a specialized financial group. Our business model has evolved alongside the changes in our ownership structure.

In recent years, we have strived to simplify, strengthen and improve our governance, embracing international best practices, not merely to comply with stringent regulations and the requirements of the Code of Conduct, but also to fully satisfy the expectations of the increasingly numerous institutional investors among our shareholders.

This improvement process has driven the Board of Directors to evolve. Today, our board is leaner and highly independent with more gender diversity and members elected from minority lists.

Given the growing importance of non-financial factors (ESG) in the business world, in 2019 we set up a Board Committee specifically devoted to CSR reinforcing the Sustainability Committee already in place at management level.

Our governance structure is geared towards making the most of management’s professional expertise. In addition to requiring that a significant percentage of the board members are managers of the banking group, the Articles of Association give the Executive Committee and the CEO extensive powers for day-to-day operations, thereby ensuring management’s independence to avoid potential conflicts of interest with shareholders. To support the Executive Committee in ordinary operations, we have set up steering committees staffed with group managers and dedicated to specific technical issues and business aspects (see the chart above).

In addition to the committees required by regulations, the Board of Directors has also set up a specific committee for the appointment of the governing bodies at the general meetings of the group’s investees in which the Mediobanca group holds an interest of at least 10% and the interest is worth more than 5% of the group’s consolidated supervisory capital.

Amendments to the Articles of Association

In the pursuit of increasingly efficient governance, in 2015 we amended the Articles of Association to implement improvements and comply with the updates to the Supervisory Instructions in Bank of Italy Circular no. 285 of 17 December 2013. These amendments specifically relate to the definition of the role of the Board of Directors as the body responsible for strategic oversight and a binding new rule for determining the independence of Directors.

PricewaterhouseCoopers has been appointed to audit the accounts until the approval of the financial statements at 30 June 2021. Raffaella Preziosi is the director of audit.

Download the most recent Report on Corporate Governance and Ownership Structures