Growth in the local area is linked to communities’ ability to generate sustainable value in the long-term. At Mediobanca we are an integral part of the local area in which we operate, and we know we play an important role in generating positive social and environmental impacts.

And for this reason we actively collaborate with institutions, non-profit authorities, associations and other local players in the development of projects and initiatives which aim to build a solid and inclusive social and economic fabric, in which the principles of trust, solidarity, equal opportunities and a dignified life are accessible to all citizens. 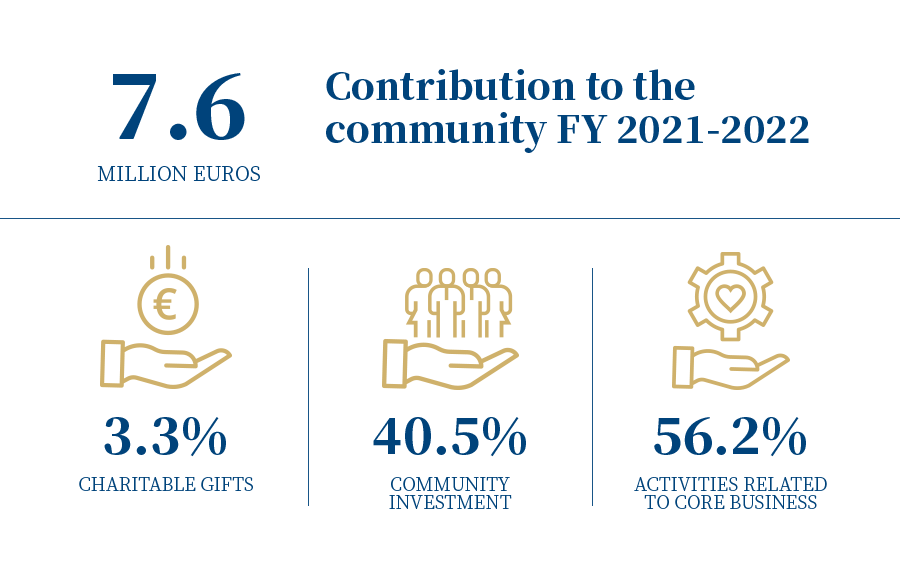 Our areas of intervention

In this year, which will be remembered above all for the outbreak of the Covid-19 pandemic, the Group has continued to focus its attention on the communities in which it operates and their institutions.
During phase 1 of the emergency, a total of €1.1m was donated to the region of Lombardy, the Milan municipality fund for mutual assistance, and the Luigi Sacco Hospital also in Milan, collected tank to the combined efforts of the Bank itself and its staff, who participated in an internal fund-raising campaign.
This first initiative was soon followed by others: CheBanca! donated the equivalent of 1x1,000 for new funds deposited in tied deposit accounts in the month of April to help in the Coronavirus emergency. The first €300,000 was donated to the “Hope” non-profit association to buy ventilators, portable ultrasound machines, and PPE, while a further €360,000 are in the process of being allocated.
During June, a further €950,000 was donated to three solidarity initiatives selected by the Group CSR Committee: the “Sempre con Voi” fund to support the families of doctors and healthcare workers who lost their lives fighting Covid-19; the mutual assistance fund of the city of Bergamo, and non-profit organization “Mission Bambini” which provides IT equipment to children in need. These donations also reflect the decision on the part of management, directors and statutory auditors to forego or reduce their salaries.
Outside of Italy, Compagnie Monégasque de Banque has played an important role in implementing a system to raise funds for the Princess Grace Hospital Centre (CHPG), allowing all Monaco-based citizens to participate in this charitable campaign. In the space of one month more than €470,000 was raised, €100,000 of which by CMB itself, allowing the hospital to acquire biological material to perform testing and swab testing, medical equipment and PPE.